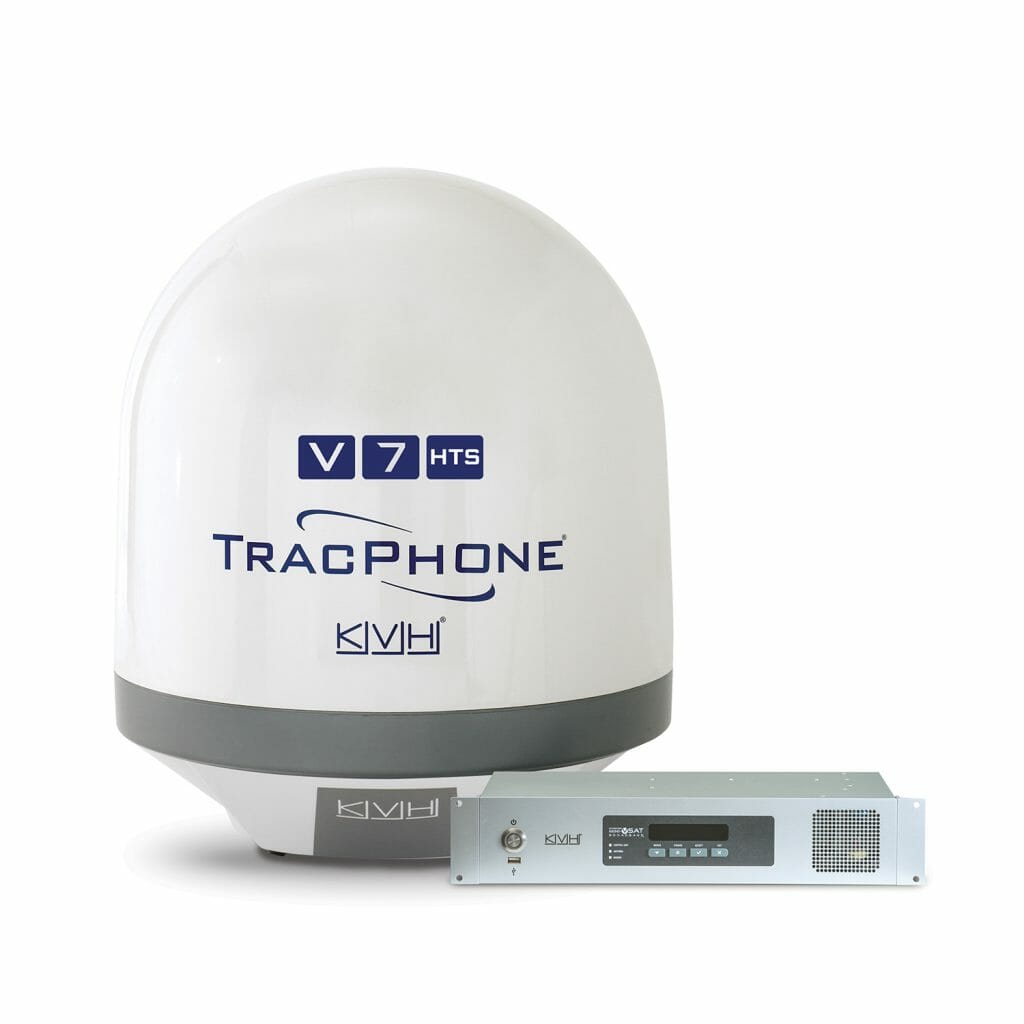 An advanced, 60 cm marine satellite antenna system designed to consistently deliver the fastest data speeds globally to the maritime market will be unveiled tomorrow by KVH Industries, Inc., at the Fort Lauderdale International Boat Show, in Florida. The TracPhone® V7-HTS achieves data download speeds of up to 10 Mbps, three times faster than current 60 cm models on the market, including KVH’s own system, and fast enough to enable the streaming of HD-quality content at sea.

In addition, to further meet the demands of increased data usage at sea, KVH is offering the TracPhone V7-HTS with new hybrid airtime plans that deliver a free, lower-speed unlimited use data channel that runs at the same time as the high-speed data channel.

With the combination of fast data streaming and global coverage, the TracPhone V7-HTS is poised to transform the use of broadband at sea. For the leisure market, the system is designed to enable yacht owners and their guests to enjoy HD streaming, popular social apps, and other benefits of connectivity for a new era of digital life at sea.

The captain of a 44.8-meter superyacht, who is one of the first to use the system, reports: “We just voyaged from Florida to Panama with the new TracPhone V7-HTS onboard, and enjoyed excellent speeds of 10 Mbps. This is a great service for a superyacht demanding higher data speeds than a traditional VSAT can provide,” says Bryan Antill, captain of the M/Y Surina.

For the commercial maritime market, the TracPhone V7-HTS is designed to enable merchant fleets to take advantage of cloud-based software programs, remote system monitoring, and data analytics in the pursuit of digitalization. With applications such as remote system monitoring requiring frequent data uploads, the TracPhone V7-HTS provides upload speeds of up to 3 Mbps, six times faster than KVH’s current 60 cm system.

“We are thrilled to offer the streaming fast TracPhone V7-HTS to boaters and mariners around the world, so they can experience the benefits of connectivity even while at sea. Ship managers can improve their operational efficiency by taking advantage of data-driven tools and decision-making, while yacht captains can offer guests onboard the faster connectivity they desire,” says Martin Kits van Heyningen, co-founder and chief executive officer of KVH. “We continue to bring innovative solutions to the marine market, including a network configuration able to provide high-speed data as well as unlimited use data all from the same system. What other services are offering as their airtime plans is a free value-added bonus from KVH.”

Additional features of the TracPhone V7-HTS include:

KVH has a history of innovation in the maritime market, and launched its mini-VSAT Broadband network in 2007 with the original TracPhone V7 antenna system, which offered a faster, more compact, and more affordable maritime VSAT system and service than any on the market at that time. Responding to customer demand in subsequent years, KVH added two more VSAT antenna systems: TracPhone V3-IP, a 37 cm, Ku-band maritime VSAT antenna introduced in 2011; and the TracPhone V11-IP, a 1 meter, C/Ku-band antenna, introduced in 2012. Earlier this year, KVH announced that it has fielded more than 7,000 maritime VSAT units.